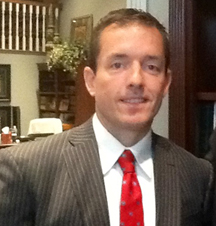 Dax is a native of Henderson, KY. He graduated in 1997 from the University of Kentucky. He obtained his undergraduate degrees in Business Management and Accounting from the UK School of Business. He was a member of the Sigma Alpha Epsilon Fraternity and served as President from 1996 to 1997. During his tenure at UK he held numerous leadership roles.

Dax attended Salmon P. Chase College of Law and graduated May 2000. He returned to Henderson to practice law as a trial attorney with his father, Zack. Dax is licensed to practice in the state of Kentucky and the U.S. Federal Courts for the Western District of Kentucky in addition to the Southern District of Indiana. He is also a member of the Kentucky Association of Criminal Defense Lawyers and the Kentucky Justice Association.